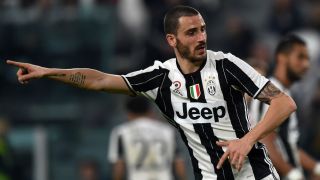 Juventus defender Leonardo Bonucci said the club proved their greatness by knocking out Barcelona in the quarter-finals of the Champions League with a 3-0 aggregate victory on Wednesday.

The Serie A leaders were strong favourites to progress having won the first leg 3-0 and held the Catalans to a goalless draw at Camp Nou to move into the last four, ending Barca's 15-match home winning streak in Europe under Luis Enrique in the process.

Bonucci believes twice recording a clean sheet against the feted frontline of Lionel Messi, Neymar and Luis Suarez demonstrates the strength of Juve, who were beaten in the final by Barcelona in the 2014-15 season.

"We knew they were coming to push us high, running a few risks at the back, but we did well to be united and compact when defending, above all thanks to Dani Alves and Mario Mandzukic for pressuring their full-backs," Bonucci told Mediaset Premium.

"It was a performance of great unity and solidity. We have belief in ourselves, because scoring three goals against Barcelona and then keeping a clean sheet at Camp Nou proves we are a great team. Now there are another two steps to go.

"We should've done better when playing out of defence and going on the counter. Nonetheless, we still created several chances and it was hard to approach it any other way in the circumstances. We just failed to convert our opportunities."

Bonucci collected Messi's shirt at the full-time whistle after winning his individual battle with the Argentina superstar and insisted Juve are the team to avoid in the semi-final draw.

"I was pleased to have the jersey of the best player in the world, so it was just a great memento for my personal collection," Bonucci added. "My son will be very happy, though he might be happier with that of [Torino striker] Andrea Belotti!

"I think it's not about who we do not want to face, but the fact all three of the other teams will not want to face us. Juventus invoke fear now in others and we've proved ourselves, so our objective is to play the final in Cardiff."

Juan Cuadrado's energy was crucial to the clean sheet for Juventus and the winger backed up Bonucci's claim that his team had shown off their quality at Camp Nou.

"We were fully aware that Barcelona are also very strong, but we knew that we could defend well if all the players were sacrificing together, playing as a unit, and so we did.

"Who next? I think whatever God decides is best."