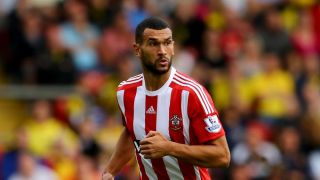 Southampton manager Ronald Koeman will not be seeking a replacement for Steven Caulker following his exit from Southampton, explaining his refusal to stand in the way of his move to Liverpool.

Caulker spent the first half of the season on loan at St Mary's from QPR but the defender cut short his time on the south coast to move to Liverpool for the remainder of the campaign on Tuesday.

The England international struggled for form at Southampton but Koeman dismissed suggestions he was disappointed at Caulker's contribution.

"We spoke about his situation yesterday evening," Koeman told reporters.

"Steven came in in the summer still before we signed Virgil van Dijk because we had Florin Gardos with a long-term injury.

"He was a back-up at that time, he didn't play a lot and normally we have more defenders for that position. I'm not the coach to complain and stop his opportunity to play for Liverpool.

"He had some injuries in the first few months and my centre-backs, like always, were Jose [Fonte] and Virgil. Then I had back-up from Maya [Yoshida], Steven and [Cuco] Martina."

Koeman will have Graziano Pelle and Ryan Bertrand fit for Wednesday's visit of Watford, with Saints having won just one of their last 10 games in all competitions.

But the Dutchman dismissed the prospect of replacing Caulker, adding that he expected a relatively quiet window.

"No, everyone is looking for centre-backs," he said when quizzed over a potential replacement for Caulker.

"We need players at the moment who make the team better. Players who are better than the players that we have. Not to just have numbers in the team, we have young ones for that.

"If we bring in a player, it will be one. We are not a club who is worried and who are going to bring in much more players than we need. I don't expect [outgoings either]."