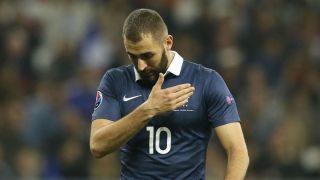 Laurent Koscielny believes the absence of Karim Benzema from the French national squad will be a "small handicap" at this summer’s European Championship.

Benzema is currently suspended from Les Bleus pending an investigation into his role in a plot to extort money from team-mate Mathieu Valbuena, and FFA president Noel Le Graet has stressed that the striker will not be involved in the Euros unless he has been exonerated.

That means France will have to do without a forward who has scored 16 goals in 15 league games for his domestic side Real Madrid this term, but Koscielny thinks his country can cope.

"Without Karim, we would take a small handicap to the Euros," the Arsenal defender told Journal du Dimanche. "But we have alternatives.

"Both players must be saddened to find themselves in this situation. They love Les Bleus and have done a lot for the team."

Koscielny, though, asserted his belief that France can win the Euros on home soil.

He said: "I believe, of course. Our group is [winnable], but we must always be careful. There will be an incredible expectation.

"Since the World Cup, we have felt a solidarity [amongst the] group, happy to be together with young people surrounded by some old. We will live for one and a half months together, it is necessary that the atmosphere is good."