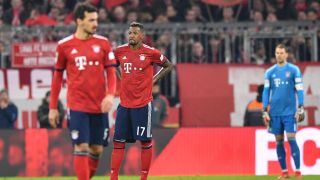 After Saturday's shock 3-3 draw at home to struggling Fortuna Dusseldorf, Hoeness was less than complimentary about Bayern's defending.

He suggested Bayern were comedic at the back and that he felt like he was living in a "surreal" and "bad film".

The result left them fifth in the table and trailing pacesetters Borussia Dortmund by nine points, but Hoeness insisted Kovac was not in immediate threat of the sack.

Kovac and Bayern turn their attentions to Benfica in the Champions League on Tuesday, and the coach accepts their defending of late has left plenty to be desired.

"It's the truth," Kovac acknowledged in his pre-match news conference on Monday. "We concede goals that are not allowed to happen.

"I'm sorry for Manuel [Neuer] most of the time. Attacking is the tough part in football; defending is relatively easy.

"Of course, you [can] misjudge situations, but so many mistakes must not happen. I agree with Uli Hoeness' opinion."

"I'm a fighter - my life has always been about coming out on top. Giving up has never been an option for me. I always look ahead and will always keep on fighting." November 26, 2018

Kovac, who is coming under increasing pressure at Bayern, is not about to give up on their season.

"Those who know me know I'm always a fighter," he said. "My whole life I have had to fight. The words 'give up', 'raise the white flag' do not exist in my vocabulary.

"Criticism is always there if you don't meet the demands that this club naturally has. We only need one point [to reach the last 16], but we want to win."