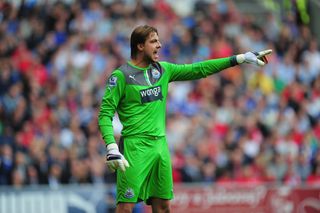 The Newcastle United goalkeeper has five international caps to his name, but has not featured for his country since February's friendly draw with Italy.

Michel Vorm, Kenneth Vermeer and the injured Maarten Stekelenburg are all fighting it out to be Van Gaal's first-choice keeper ahead of Brazil 2014, which Netherlands have already qualified for.

The Dutch will play their final qualifying fixtures against Hungary and Turkey this week, with Krul seeing them as a chance to showcase his abilities on the international stage.

"I look forward to show my skills again it’s been a long time since that the coach has seen me at work," he said.

"The World Cup is at the end of the season so we still have a long way to go in which I can prove myself. Things can change.

"The coach has no fixed team yet, it's all still open. These two qualifying matches are ideal moments (to prove yourself).

"Italy (at) home was my last match. Then I suffered injuries, but fortunately I am now fit again."

Krul has been an ever-present under Alan Pardew in the Premier League so far this term, with the Tyneside club sat 11th after seven games.