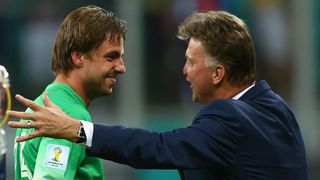 The 64-year-old has come under intense scrutiny at Old Trafford but a 2-1 win over Swansea City on Saturday ended a run of eight matches in all competitions without a win to provide some relief.

Van Gaal has been criticised for a bland style at United, but Krul, part of the coach's Netherlands squad that finished in third position at World Cup 2014, says he is yet to work with someone better than his compatriot.

"Under Van Gaal I experienced what is the highest level in professional football," Newcastle United goalkeeper Krul told De Telegraaf.

"Under him everything is top notch: the organisation, training, discipline, just everything. With Van Gaal at the helm, we went up a level.

"I had to train harder, and I did like a mad man. We went along a path and knew that we had all experienced a wonderful World Cup. I will not forget that."