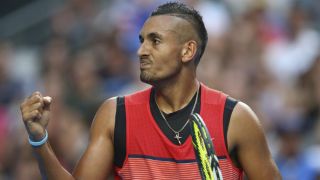 Tottenham and Emmanuel Adebayor were the topic of conversation after Nick Kyrgios continued his run at the Australian Open.

Australian youngster and 29th seed Kyrgios progressed to the third round at Melbourne Park courtesy of a 6-4 7-5 7-6 (7-2) win against Pablo Cuevas on Wednesday.

A showdown with sixth seed Tomas Berdych looms for Kyrgios, but there was still time for the 20-year-old to talk about his beloved Tottenham.

Kyrgios visited the Premier League club's facilities in 2014 and, when asked how he became a supporter, last year's Australian Open quarter-finalist singled out former striker Adebayor as one of the reasons.

"I don't play so much, but I'm a massive fan of Adebayor and he doesn't play there anymore. I've just stayed with that team.

"He was a boss on FIFA. He was a scoring machine. That pretty much just stayed."

Tottenham's form will have given Kyrgios cause for cheer this season, with Mauricio Pochettino's side fourth in the table and through to the last 32 of the Europa League.

The Londoners face an FA Cup third-round replay at Leicester City on Wednesday.