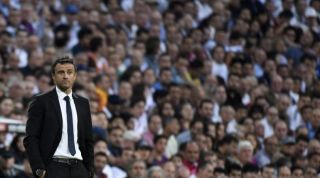 Barca had not conceded a single league goal prior to last Saturday's crushing 3-1 Clasico defeat at the home of arch rivals Real Madrid.

The top five in the Spanish top flight are now separated by just two points, with Barca ahead of second-placed Sevilla on goal difference alone.

And the Catalan giants will be desperate to return to winning ways on Saturday against their coach's former side, who sit sixth in the table following an encouraging start to the campaign under Eduardo Berizzo.

Celta, who have lost just once this season, claimed a first victory in three last time out, easing to a 3-0 victory over Levante to move on to 16 points from nine games.

Sevilla are in action on Sunday, against an Athletic Bilbao side who ended a nine-match winless streak in their previous league game by winning 1-0 at Almeria.

The celebrations continued for Cristiano Ronaldo and Real Madrid, who are now just a point behind Barca and Sevilla, after Saturday's Clasico success.

The Portuguese won the 'Best Player', 'Best Forward' and 'Best Goal' prizes at La Liga's annual awards ceremony, and his pursuit of a third Ballon d'Or gathering pace ahead of a weekend trip to Granada, which will see Real go in search of an 11th straight victory in all competitions.

Carlo Ancelotti's men have scored 42 goals during their winning run, with Ronaldo taking his tally in the league to a staggering 16 from eight appearances.

The Argentinian will no doubt use that as further motivation as his club, fifth in the table, aim to build on a narrow win over local rivals Getafe when they host Cordoba on Saturday.

Fourth-placed Valencia's quest for consistency continues at Villareal on Sunday.

Marcelino Garcia Toral's men had won four in a row across all competitions prior to last weekend's defeat at Sevilla and will be hoping for a repeat of last season's 4-1 success against the men from the Mestalla.

The pressure continues to build on Real Sociedad coach Jagoba Arrasate, after their winless run reached seven matches last weekend, and he will be out to impress against Malaga.

Bottom club Levante have shipped 11 goals in their last three matches, but could climb out of the relegation zone with victory against Almeria.

Elche are in a similar position as they prepare to host Espanyol, while Rayo Vallecano face Eibar on Monday.

Deportivo La Coruna and Getafe kick off the weekend's action with a Friday meeting at the Riazor.