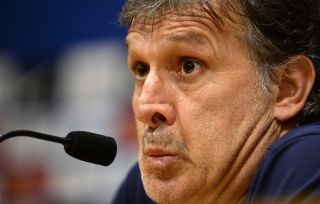 Couple Barca's dominance in front of their own fans with the fact that Espanyol have left Camp Nou victorious just once in the last three decades, a 2-1 win in February 2009, and the odds of an upset appear slim at best.

Barcelona supporters, though, will need no reminding of how Espanyol can inflict misery on their neighbours.

A 2-2 draw between the two sides at Camp Nou in the penultimate game of the 2006-07 season, sealed by Raul Tamudo's 90th-minute effort, ultimately handed Real Madrid the title by virtue of a superior head-to-head record.

Recent encounters, however, have been dominated by Barca, who have kept a clean sheet in six of the last eight Liga encounters between the rivals.

Unbeaten in competitive action since being dumped out of the UEFA Champions League by eventual winners Bayern Munich in May, and having suffered just two Liga defeats in 2013, Barca will be hoping to take full advantage of playing 24 hours before the likes of Real by cranking the pressure up with another victory.

Defender Adriano is a doubt for Barca after he suffered a hamstring injury during Tuesday's 3-0 win at Celta Vigo.

Espanyol head to Camp Nou determined to avoid a fourth successive away defeat and keen to build on the midweek goalless draw with Malaga.

A run of one win in six league games has unravelled what was a promising start to the season for Javier Aguirre's side up until mid-September.

The form book and recent history may point to a straightforward Barca victory, but Espanyol goalkeeper Kiko Casilla insists his team-mates are capable of upsetting the odds.

Casilla said: "We all know how important the derby with Barcelona is. We will go to Camp Nou and try to go all out.

"We'll have to play with intensity and try to stay focused for the entire 90 minutes.

"It's not going to be easy but it won’t be impossible. I have total respect for the Barca players, but I am not afraid of them.

"If you're scared of playing against Barcelona then you might as well stay at home."