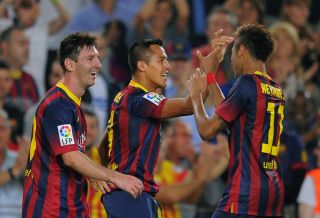 Gerardo Martino's side continued their unbeaten start to the Liga campaign as Barca saw off the challenge of Real Madrid on Saturday with a 2-1 victory at Camp Nou in the marquee fixture.

A goal in either half from Neymar and Alexis Sanchez put Barcelona into a commanding lead before Jese Rodriguez's consolation effort for Carlo Ancelotti's side in injury time.

That result took the Catalan giants' record to nine wins and one draw from their 10 La Liga fixtures, meaning the defending champions head into Tuesday's game top of the table by one point from Atletico Madrid and six clear of Real.

Martino may use the game as an opportunity to once again rotate his squad, as the Celta fixture marks the second of three matches that Barcelona will play in the space of seven days.

The likes of Alexis, Pedro and Carlos Puyol were all named on the bench against Real and Martino could utilise his squad in order to keep them fresh, with a league clash against Espanyol on Friday on the horizon.

Key to Barca's success could be the form of Brazilian Neymar after his starring role in his first Clasico appearance, when the 21-year-old scored to take his Liga tally to three goals this season.

Lionel Messi will also be keen to make an impact, after failing to hit top form against Real.

Martino revealed in his pre-match press conference on Monday that centre-back Gerard Pique, striker Isaac Cuenca and goalkeeper Oier Olazabal will not be part of his squad.

Pique has been struggling with a hamstring issue, while Cuenca has only just returned from a knee injury. Full-back Jordi Alba (hamstring) and midfielder Jonathan dos Santos (knee) also remain sidelined.

Barcelona will be wary of an upset, having drawn the corresponding encounter between the two sides 2-2 last season.

Luis Enrique's side have endured a difficult start to the season and sit in 16th position with just nine points from 10 games.

Celta, though, will be buoyed by their 5-0 rout of Malaga on Saturday, a victory that ended a run of seven league games without a win, including four straight defeats prior to facing Bernd Schuster's side.

Denmark international Michael Krohn-Dehli could come back into contention following a sprained ankle, although former Barca star Enrique may opt for the same starting XI that comfortably saw off Malaga.