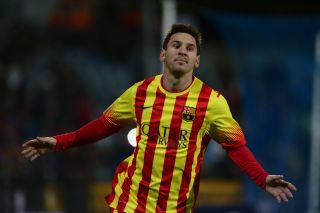 The Brazil international suffered sprained ankle tendons in a 2-0 Copa del Rey victory at Getafe on Thursday night and will be sidelined for three to four weeks.

Neymar's absence is a blow for the Spanish champions, but with Lionel Messi firing on all cylinders again Barca will be expected to complete a sixth consecutive win over Levante on Sunday.

The Argentina captain scored twice at Getafe, having also scored a brace in the first leg, as Martino's team cruised to a 6-0 aggregate win to set up a quarter-final clash with their opponents on Sunday.

Messi's sublime second goal proved he is getting back to his best, as he showed a sharp turn of pace to set off on a trademark run before producing a clinical finish, and he is set to make his first La Liga start for over two months this weekend.

The sight of Messi in full flow would have been enough to strike fear into Levante defenders, as the Barca talisman has scored seven goals in his last five games against the Valencia club.

The 26-year-old scored twice on the opening day of the season as Barcelona hammered Levante 7-0 and he already has 18 goals for the season, despite missing a chunk of the season due to a hamstring and thigh injuries.

Barcelona remain level on points with Atletico Madrid after drawing with Diego Simeone's side last weekend and Real Madrid are now just three points adrift of the top two.

Martino's charges had won seven games in a row before being held at the Vicente Calderon and normal service was resumed at Getafe.

Levante have recovered well from their opening day thrashing at the Camp Nou to sit halfway in the table, although will not need reminding that they have failed to score in four of the previous five encounters with Barca.

Joaquin Caparros' side come into the game on the back of a 1-0 win over Rayo Vallecano that ensured progression in the Copa del Rey by the same scoreline on aggregate.

David Barral scored the only goal of the game and the striker was also on target to ensure Malaga were consigned to a 1-0 La Liga defeat last weekend.