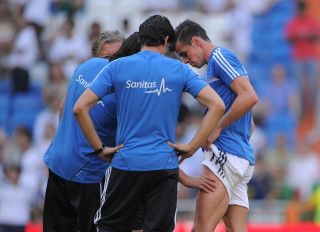 The victory was ultimately comfortable for Real, who could easily have triumphed by more goals, despite the visitors taking a shock fifth-minute lead through a deflected Angel Lafita strike.

Real were not behind for long, as Pepe and Ronaldo gave them a half-time advantage, before Isco capped off another impressive display with a lovely finish just prior to the hour mark and Ronaldo completed the scoring with his second late on.

However, the gloss was taken off the scoreline by concerns over the fitness of Bale, who missed out on what would have been his home league debut after suffering an injury in the warm-up.

The pre-match headlines were dominated by the former Tottenham man, who was pencilled in to start behind Karim Benzema in attack, but failed to make the starting XI after pulling up with what was believed to be a hamstring problem.

Isco retained his place in the side as a result, with Carlo Ancelotti making just three changes from the side that won 6-1 against Galatasaray in the UEFA Champions League in midweek.

Ronaldo lost possession to Miku in his own half and the Venezuelan laid the ball off to Lafita, whose effort from outside the area took a significant deflection off Pepe before flying past Lopez.

That stunned the hosts into life and after a sustained spell of pressure, they equalised after 19 minutes.

Angel di Maria floated a magnificent free-kick towards the back post and after Miguel Angel Moya had denied the unmarked Ronaldo, Pepe knocked in the rebound from point-blank range.

It was no more than Real deserved, and Ronaldo made amends for his earlier error in the 34th minute as he converted from the penalty spot after Michel had handled the Portuguese’s initial free-kick.

Getafe found their hosts particularly elusive in attack in the early part of the second half, yet the wasteful Benzema could not capitalise as he shot straight at Moya from a central position.

Moya was helpless in the 59th minute, however. Ronaldo took a quick free kick on the left flank, allowing Isco to burst across the penalty area and curl an unstoppable effort home for his fourth league goal of the season.

Ancelotti’s side were not content with three goals, though, and they continued to bombard the Getafe goal.

Initially that was without reward as Moya denied Ronaldo before Alexis Ruano deflected an Isco effort wide.

The much-maligned Benzema then missed two more chances in the final 20 minutes as he headed crosses from Isco and Daniel Carvajal off target, while Ronaldo struck the post before Getafe's defeat was compounded four minutes from time as last-man Michel was shown a red card for a foul on substitute Jese Rodriguez.

That seemed to be that but things got even worse when Real added a fourth in stoppage time, as Ronaldo produced a clever backheeled finish from Sami Khedira's right-wing cross to continue Real's unbeaten start to the season.