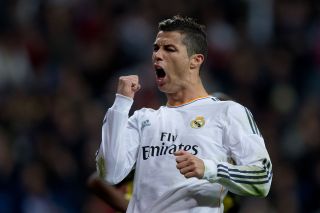 Ronaldo struck a first-half penalty before netting twice in the second period to become the club's fourth-highest Liga goalscorer with 157 goals, one more than the legendary Puskas.

On a record-breaking night at Santiago Bernabeu, Gareth Bale also capped his first start at home with two first-half strikes.

Madrid saw their 3-0 lead reduced before the break as an Ivan Rakitic penalty and close-range strike from Carlos Bacca brought the visitors to within a goal.

The hosts, however, turned on the style in the second half as Karim Benzema and Ronaldo both found the net twice to seal a comfortable victory, despite Rakitic curling home a third for the visitors. Rakitic also missed from the spot in a frantic encounter.

Carlo Ancelotti made four changes from Saturday's Clasico defeat to Barcelona, while Sevilla – without an away win in 13 months – made a single change from their victory over Osasuna.

Madrid enjoyed the perfect start following a low-key performance at Camp Nou and took the lead through Bale in the 14th minute.

Isco ran the ball out of his own half and played a neat ball into Benzema, the Frenchman rolled the ball back into the Wales international and he fired into the top corner.

Sevilla were struggling to find any end product despite neat build-up play when they did have the ball, and their task became even tougher when Bale netted his second of the night.

Madrid were awarded a free-kick 25 yards from goal after a crude challenge by Rakitic on Ronaldo in the 26th minute. Bale took the set piece and saw his effort deflect off the wall to wrong-foot Beto as it flew into the opposite corner.

The hosts moved 3-0 ahead after some poor defending from Fernando Navarro allowed Isco to dispossess him on the edge of the area. The defender then brought the forward down inside the area and Ronaldo made no mistake from the spot.

Sevilla were given a way back into the game when Sergio Ramos bundled Diogo Figueiras to the floor in the 38th minute and they had a penalty of their own.

Rakitic grabbed the ball and made no mistake with a well-placed spot-kick for his first goal of the season.

And the visitors reduced the deficit even further two minutes later as Vitolo and Jairo Samperio combined well to give Bacca the easy task of firing into the empty goal.

Unai Emery's side should have levelled early in the second half after creating a fantastic opening for Jairo, but he was unable to convert it and the hosts broke on the counter attack with Ronaldo.

Ronaldo found Bale on the right who delivered a low cross to Benzema and the Frenchman fired home to end a seven-game run without a goal.

On the hour mark, Ronaldo netted his second of the game after meeting a cross from Bale to fire past Beto, but Rakitic kept his side in the game with an exquisite finish from the edge of the area after neat work from substitute Diego Perotti.

But the night belonged to Portugal international Ronaldo as he completed his hat-trick in the 71st minute before Benzema added his second in the 80th minute to secure the win, with Rakitic slamming a spot-kick against the crossbar in between Madrid's sixth and seventh goals.