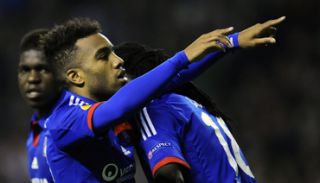 "Jeremy Menez has been rested by Paris Saint-Germain as he recovers from a back problem and was forced to withdraw from the squad," FFF said on their website.

The 21-year-old Lacazette, who has become a regular starter for Lyon this season, will join up with the senior squad for the first time as France take on Uruguay and Brazil in friendly internationals on June 5 and 9 respectively.

Lacazette has been a key player at youth level in recent years, scoring the winning goal against Spain in the Under-19 European Championship final in 2010.