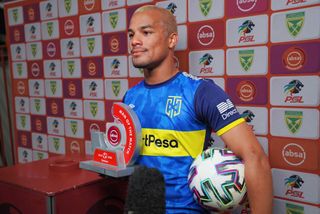 The 23-year-old joined the Citizens after putting pen to paper on a three-year contract after his contract with at Wits expired at the end of last season.

The Citizens jumped at the chance to signing the Bafana Bafana international on a long-term basis after he was given his clearance by the Clever Boys.

Lakay's new deal will keep him at the Mother City-based outfit until 2024.

The former Ajax Cape Town midfielder recently spent the 2019-20 campaign on loan at City in which he bagged three goals and assisted two from 22 appearances in all competitions, missed out on only six of their 30 appearances in the league.

Lakay is no stranger to the South African top-flight having already turned out for SuperSport United, Ajax Cape Town, Bidvest Wits and Cape Town City, making a total of 77 appearances across all competitions, while scoring five and assisting five since making his debut back in 11 January 2015.