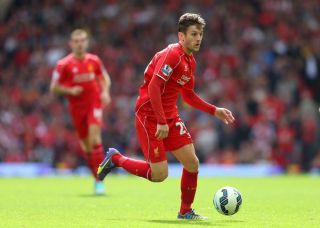 The England international completed his switch to Anfield for a reported £25 million fee in July after months of speculation.

Lallana was a huge success at the St Mary's Stadium, helping the club climb from League One to the Premier League, and was appointed captain during Nigel Adkins' reign on the south coast, keeping the armband under Mauricio Pochettino.

However, the 26-year-old left on somewhat of a sour note amid suggestions he threatened to not represent the club if his move to Liverpool was blocked.

Lallana strongly denies such suggestions, claiming that the lure of UEFA Champions League football made Liverpool impossible to turn down.

"Once I knew of Liverpool's interest, I asked the club if they could come to an agreement and that it would be my wish to leave and join Liverpool. I'll make no secret of that. I'm an ambitious person.

"I could have stayed at Southampton until I retired and finished my career there. But at the age I was at, and with the opportunity I had, I couldn't have turned it down. I would have regretted it at the end of my career if I had.

"That leaves people disappointed. Saints fans. But I hope that, in time, they will enjoy the memories we had down there and the successes we had in such a short space of time.

"It was a difficult decision, not an easy one. But it's such an historic club. The manager was a big influence, the way he played his football. Champions League football is another level, too. You want to be playing that and testing yourself. It was a combination of those reasons."