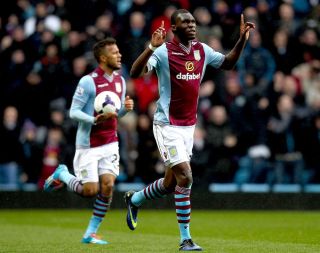 Norwich City had no answer to Villa's attacking trio of Christian Benteke, Gabby Agbonlahor and Andreas Weimann as Chris Hughton's men were beaten 4-1 at Villa Park a fortnight ago.

Benteke failed to find the back of the net in February, but scored twice as the Villa Park outfit put Lambert's former club to the sword in their last top-flight encounter.

And the Scotsman has no doubt that they can cause Jose Mourinho's side problems  this weekend.

He told the club's official website: "The three lads have been an absolute credit to us in the time I've been here for their effort and they way they play.

"When they are on song then the three of them are an absolute handful.

"They have got everything that you love in footballers - the pace, power, speed, work-rate. That's what you look for in players."

Chelsea are unbeaten in 14 league games and Lambert knows that his side face a stern test against the London club, who are seven points clear at the summit.

He added: "Their midfield lads get a bundle of goals as well. They have got some really top players. I don't think it is just the front three.

"It is the team as a collective unit that is really strong. John Terry coming back and playing the way he has gave them a big boost and Gary Cahill has been very consistent all season too."