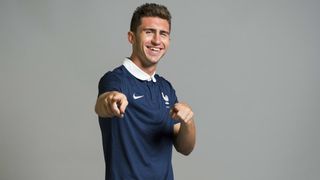 Paying his Athletic release clause may have cost City £57million, but Laporte remains uncapped by France, although he was called up for the first time by coach Didier Deschamps last year.

France have perhaps the strongest group of young players in the world right now, with 23-year-old Laporte battling for international selection alongside the likes of Barcelona duo Samuel Umtiti and Ousmane Dembele.

A complete unknown at the start of last season, Mbappe's talismanic efforts in spearheading Monaco's charge both domestically and in continental competition led him to becoming the metaphorical white whale for teams across Europe.

Real Madrid, Barcelona, Arsenal and Liverpool were all linked with the teenager, but Mbappe opted to stay in Ligue 1 by signing for Paris Saint-Germain, for whom he has scored 15 goals in all competitions.

After Neymar's world-record move to PSG, Barca were left with a huge pile of cash burning a hole in their pocket. They chose to spend €105m of that windfall on Dembele.

Borussia Dortmund made a gigantic profit on the former Rennes forward but he has struggled with his fitness since making the move to Camp Nou, a torn hamstring ruling him out for several months.

Dembele is on the sidelines again with another hamstring injury but has time over the second half of the season to show why Barca made him their record signing.

Ousmane Dembélé named 2016/17 Bundesliga Rookie of the Year and to the Team of the Year as well! Congrats, Ousmane! December 14, 2017

At the age of 21, Coman has already played for some of the biggest clubs in the world, having begun his career at PSG before moving to Serie A to sign for Juventus.

Coman is now at Bayern Munich, where he has scored three Bundesliga goals this season to help put the German champions on track to win yet another title.

After impressing Pep Guardiola so much that he signed him for Manchester City from their Champions League conquerors Monaco, Mendy became the then-most expensive defender in world football.

The left-back was a key component of Monaco's charge to the Ligue 1 title and the semi-finals of the top continental competition, but a serious knee injury has disrupted his progress at the Etihad Stadium.

Mendy should return to full fitness in time to force his way into Deschamps' plans for the 2018 World Cup, however.

Barca's defence looked vulnerable as they surrendered LaLiga to arch-rivals Real Madrid and crashed out of the Champions League to Juventus, but Umtiti provided one of few positives and he has thrived in his sophomore campaign with the Catalan giants.

Lemar is arguably behind only former Monaco team-mate Mbappe and Dembele as the hottest French property right now.

Reportedly a target for Premier League side Liverpool after Arsenal failed with a deadline-day move in August, Lemar served as a key creative presence in Monaco's incredible 2016-17 campaign.

He had nine goals and 10 assists in Ligue 1 last term but has understandably been less effective this season, with Leonardo Jardim's side having been shorn of a cluster of their star players.

Comfortable on the ball going forward and adept at winning it back, Rabiot provides an assured presence in the engine room and should be a mainstay for the Parisians and France for years to come.

Tolisso's contributions for Lyon last season flew under the radar somewhat in the face of Monaco's astounding exploits.

However, no other midfielder in Ligue 1, the Premier League, the Bundesliga, LaLiga or Serie A had a bigger goalscoring impact than Tolisso, who netted 14 times in all competitions.

Thrust into the spotlight at Bayern Munich following a €41.5m move, look for the 23-year-old to become more of a household name as he continues to flourish after leaving Ligue 1 for Germany.