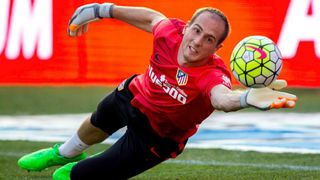 Jan Oblak has voiced his delight with Atletico Madrid's results so far this campaign and hopes they can hold on to top spot in the Liga table when they take on Las Palmas at the weekend.

The Vicente Calderon side leapfrogged Barcelona in the table when the Catalans dropped points against Espanyol earlier this month and currently hold a two-point lead over Luis Enrique's men.

They cannot afford to slip up on Sunday, though, if they are to stay clear of their title rivals and Oblak hopes they can build on their recent good form.

"We have shown so far that we are in good form," Oblak told the club's official website.

"We have been playing well and sit atop of the table. Of course, we are only halfway through the season and this campaign is not over just yet. But we hope to continue on the same path and to keep adding points to our tally.

"We will see where we are at the end of the season then. We hope to reach all our objectives this season.

"The most important thing right now is that we are playing well and sit first in the table. Let's hope we can keep that up."

Atletico have been in sublime form in recent months and will feel confident heading into Sunday's encounter.

Diego Simeone's men were beaten 1-0 by Malaga in December, but have won the remaining eight of their last nine La Liga matches, with Oblak keeping seven clean sheets in the process.

Las Palmas, meanwhile, have a rather discouraging record versus Atletico in recent times.

They have lost their last three league games against Atletico without scoring and have won just once against the Madrid outfit in their last six top-flight games at home (drawing one and losing the remaining four).

Las Palmas were narrowly beaten 1-0 by Atletico at the Calderon back in August 2015, with Antoine Griezmann's first-half goal making the difference earlier this season.

Quique Setien's men also have reasons for optimism, however.

They are on a five-game unbeaten run, collecting five points from their last three Liga games, while also beating Eibar twice in the Copa del Rey to reach the quarter-finals of that competition.

Their recent resurgence has seen them climb to 16th place in the table with 18 points from 19 encounters, three points clear of the drop zone.

- Las Palmas have gone three games without defeat in La Liga (winning one and drawing two), their best run this season.
- Atletico have only once before conceded as few goals (8) after their opening 19 games in La Liga as this term, when they ended up winning the title in 1995-96.
- Only Espanyol (91) have attempted fewer shots (including blocks) at home than Las Palmas (104) in La Liga this season.
- Los Colchoneros have scored the highest number of goals involving players who started on the bench in La Liga this season (17 - eight goals and nine assists).
- Tana is the only Las Palmas player to have scored in three La Liga games in a row since the 1998-99 season.
- Antoine Griezmann has scored three of his last five Atletico goals away from home in La Liga, all of which came in the second half of games.