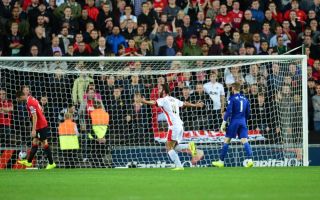 Will Grigg and Benik Afobe were the heroes at stadium:mk on Tuesday in the second-round clash, scoring a brace apiece for the League One side to further add to the woes of United's much-anticipated new boss.

With a 2-1 home reverse to Swansea City and 1-1 draw at Sunderland representing a poor start to United's Premier League campaign, Van Gaal must have viewed this fixture as an opportunity to grab a simple opening win.

But even the feel-good factor generated by the completion of Angel di Maria's British transfer record move to Old Trafford in the hours leading up to kick-off could not bring an improvement on the pitch.

The last time they entered the competition at this phase, in 1995, United suffered the ignominy of losing a two-legged tie 4-3 to York City - including a 3-0 reverse at Old Trafford.

And memories of such embarrassment were brought back to the fore as MK Dons outworked and, most damningly, out-passed their illustrious opponents to secure a famous triumph.

MK Dons came back into the game, although their possession was not producing opportunities.

However, Karl Robinson's men were gifted an opener in the 25th minute by a Jonny Evans howler.

The centre-back's pass from defence was intercepted by Ben Reeves, whose simple ball left Grigg with the easiest of tap-ins.

That seemed to knock the wind out of United's sails, although Powell threatened to reinvigorate his side when firing just wide from range with the outside of his foot.

Things almost went from bad to worse after the interval, MK Dons denied a penalty when Evans appeared to have handled in the area.

But United could not take advantage, Welbeck curling a powerful effort just wide of the post.

And their misery was compounded in the 63rd minute, Reeves and Grigg combining again in a fine move that ended with the latter cleverly chesting home his team-mate's perfect left-wing cross.

Any thoughts of a United revival were snuffed out by Grigg's replacement Afobe, who then slid home easily after being picked out by Danny Green.

Adnan Januzaj rattled the post, but, if anything, Van Gaal's side were lucky not to lose by more with David de Gea forced to turn away Dean Lewington's cross.

Relief at that quickly turned to further despair, however, as Afobe bundled his way into the box and volleyed home to create a scarcely believable scoreline.

Hope continued to come in the shape of Wilson, whose header again forced Martin into an excellent save, although that was scant consolation for Van Gaal.