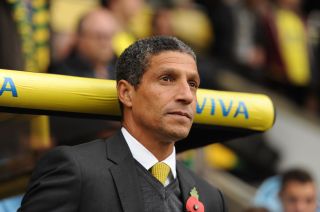 United, who have won the competition three times in the last eight seasons and four times in all, have suffered an indifferent start to the season under new manager David Moyes and currently lie eighth in the Premier League table.

The reigning league champions have shown signs of improvement recently, however, going unbeaten in five matches in all competitions.

They also come into the game on the back of a confidence-boosting 3-2 win over Stoke City where they twice recovered from a losing position.

By contrast, Chris Hughton's side are struggling in 18th having won just two of their nine league games so far, their latest outing a 0-0 home draw with Cardiff City.

Twice winners of the competition, in 1962 and 1985, Norwich sealed their place in the fourth round with a dramatic 3-2 victory at Watford last month.

New signing Gary Hooper was the hero that night, the ex-Celtic striker netting in the 90th minute to force extra-time before claiming the winner with a penalty shootout looming.

United's passage was secured with a 1-0 triumph over Liverpool at Old Trafford, Javier Hernandez striking the decisive blow a minute into the second half.

Hernandez also secured victory for his side against Stoke and is looking at Tuesday’s game as a chance for United to continue their winning momentum.

"We have another game against Norwich here at Old Trafford and we want to get through in the cup and keep winning.

"Hopefully, we can do that."

Hughton insists his side are ready for the challenge awaiting them at Old Trafford.

"They don't come any harder than an away game at Manchester United. But I think you have to relish the challenge," he said.

"It's a cup competition and any game at Old Trafford is an exciting prospect and one we'll very much be looking forward to."