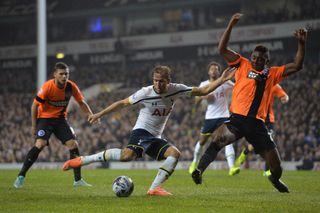 Argentina midfielder Lamela hit the headlines with a stunning 'rabona' strike in the 5-1 UEFA Europa League hammering of Asteras Tripolis last week and he came off the bench to open the scoring at White Hart Lane on Wednesday.

England Under-21 striker Kane then followed up his hat-trick against Asteras by adding a second goal to seal a deserved victory against a Brighton side without a win in their last 10 Championship matches.

Mauricio Pochettino made 10 changes to the Tottenham team that was beaten 2-1 by Newcastle United on Sunday, with only Jan Vertonghen keeping his place in the side, and his fringe players did enough to see the London club into the last eight.

Sami Hyypia's Brighton side offered little going forward, but will feel they should have had a second-half penalty when Kazenga LuaLua went down under a challenge from Federico Fazio, but referee Mark Clattenburg waved play on.

Clattenburg was taking charge of a game for the first time since it emerged that he will not officiate this weekend amid reports of two breaches of protocol.

Eighteen-year-old goalkeeper Christian Walton was handed a senior debut for the visitors and LuaLua returned from suspension.

The start was delayed for 15 minutes due to traffic congestion and when they belatedly got under way it was one-way traffic, as Brighton were forced onto the back foot.

Walton had a nervy moment when he flapped at a corner after nine minutes, but got away with that mistake as Lewis Dunk cleared.

Dunk blazed wildly over the crossbar in a rare Brighton attack, but that was a brief respite for the visiting defence and stand-in Tottenham skipper Aaron Lennon came close when he got on the end of a Roberto Soldado cross, only to see his effort loop wide of the far post.

Walton then made a confidence-boosting save with his feet to keep out Soldado's shot from a tight angle after Kane's initial effort had been blocked 10 minutes before the break.

Lamela replaced Lennon at half-time and took just nine minutes to make an impact, playing a one-two with Soldado before beating Walton with a right-footed finish.

The lively Kane flashed a shot just wide of the far post, then Soldado's drive struck the crossbar after a swift Tottenham break as Brighton struggled to get out of their own half.

Brighton thought they should have had a penalty when LuaLua went down under a challenge from Fazio, but referee Clattenburg waved play on.

And Tottenham sealed the victory after 74 minutes, when Kane was on hand to finish from close range after Soldado's effort was kept out following good work from Andros Townsend down the left.