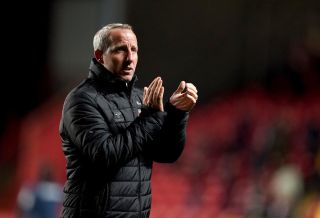 Charlton manager Lee Bowyer praised his side’s openness to new tactics after he out-thought counterpart Phillip Cocu in a resounding 3-0 victory over Derby at The Valley.

Macauley Bonne gave the Addicks an early lead before Naby Sarr and Conor Gallagher sealed the points in the second half.

Bowyer, who saw his side move up to seventh in the Championship table, said: “We have never played that formation before.

“We tried it on Thursday for the first time. Everything we asked the players to do, they did.

“I thought we were a bit tentative in possession in the first half, but we moved the ball a lot better in the second half.

“It was probably our best all-round performance from start to finish of the season.

“All I do is watch the team we are playing and think: ‘How can we beat this team?’ That’s why we tried this formation for the first time. And it worked.

“We had Jake Forster-Caskey playing at left-back. He’s never played there before, he’s only just come back from a year out and I thought he was outstanding.”

Bowyer said: “Some finish, wasn’t it? An unbelievable strike but I don’t get carried away with it because he does it every day in training.

“For me, the kid’s got everything. Chelsea have got some player there and he’s only 19. Hopefully we can keep him for the season.”

Cocu was scathing towards the attitude of his Derby players, criticising their inability to match Charlton’s desire and work-rate.

“It was a bad day,” he said. “I would say we were not on the same level in terms of desire and energy-wise as our opponents. If you are not, it’s very difficult.

“I don’t know the reason why our performance was so flat because there had been no expectation of it this week after the international break.

“In our previous games, we had some extra adrenaline in the team to what we did today.”

Asked if there had been a delayed reaction to the drink-driving convictions of Tom Lawrence and Mason Bennett, Cocu was non-committal.

He said: “I don’t like to go into finding excuses for a bad performance. Before the international break we were improving as a team. And you have to find a reason for a game like this.

“But it starts with putting your best effort in for your fans. And having the same desire to win as your opponent. It was not good enough today, not the way I want to see it.

“You never like to talk about desire because that’s where the game starts.

“For me it was a surprise because I was extremely content with our preparation in the week, but we couldn’t transform it from training onto the pitch. We couldn’t play our game.

“We have to make sure we have a good reaction (against Wigan) on Wednesday. Each game after a defeat is very important.”