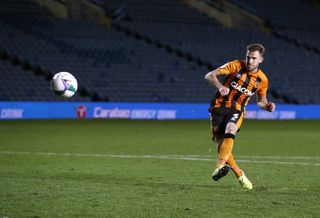 Hull clinched a deserved upset at Leeds in the Carabao Cup second round after winning a penalty shootout 9-8.

Tigers defender Alfie Jones scored the decisive penalty after Leeds had been fortunate to force a 1-1 draw through Ezgjan Alioski’s stoppage-time equaliser.

Hull had deservedly led through forward Mallik Wilks, who appeared to have sunk his former club with a deflected early first-half effort.

Leeds were disappointing after making 11 changes and had next to no chances throughout 90 minutes before Alioski slammed home an unlikely leveller in the fourth minute of added time.

Hull, 2-0 winners at Gillingham following relegation to League One in July, made six changes themselves, but were comfortably the superior side.

Wilks, one of three Hull players facing his former club, fired the visitors into a fifth-minute lead via a deflected shot after linking well with George Honeyman on the edge of the penalty area.

Leeds appeared all at sea and Hull went close to increasing their lead on three occasions in the next 10 minutes.

James Scott’s thumping effort was blocked and Wilks forced an excellent rushing save from Leeds goalkeeper Kiko Casilla before his curling goalbound shot deflected off Leif Davis for a corner.

Leeds threatened twice during their best spell of pressure midway through the first half, but fierce drives in quick succession from Oliver Casey and Alioski were brilliantly blocked by Hull defender Jones.

Wilks was causing both of Leeds’ young centre-backs no end of trouble and he was denied a second goal by Casilla’s smart near-post save.

Hull teenager Keane Lewis-Potter was next to shine for Grant McCann’s side, his brilliant first touch taking him past Jamie Shackleton, but his shot curled just wide in the 41st minute.

Pascal Struijk replaced Casey at half-time and Hull’s new signing Thomas Mayer came on for his debut in place of Lewis-Potter.

Leeds stepped it up after the break, but were not accurate with their final pass and a frustrated Marcelo Bielsa began to belt out instructions from his technical area.

The home side were doing most of the probing as the game entered the final half-hour, but it was Casilla who was forced into another save to keep out Greg Docherty’s shot, while Hull keeper Matt Ingram remained untested.

Hull’s biggest threat Wilks was strangely withdrawn in the 71st minute and replaced by Billy Chadwick.

The visitors almost extended their lead in the 77th minute. Casilla beat away another effort from Docherty and then Scott’s clever flick rolled the wrong side of Casilla’s left-hand post.

The Tigers looked set to progress to the third round, before Alioski rifled home an emphatic finish after Hull had failed to clear their lines, but they made Leeds pay the penalty.