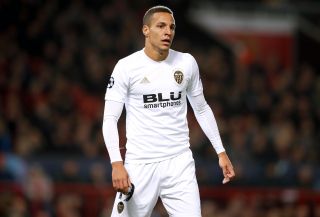 Leeds have signed Rodrigo from Valencia for a club-record fee.

The forward has penned a four-year deal at Elland Road and has reportedly cost Leeds around £30million.

The 29-year-old moves to the club ahead of their return to the Premier League next month.

“I’m really excited and very happy to join the club in this important season for all of us,” he told the club’s Twitter account.

“It’s a new step in my career and I want to help the team to achieve the goals of the season.

“Leeds have been working for two weeks on this deal with Valencia, we knew Valencia have some problems now as we didn’t achieve the Champions League.

“Since the first time Victor (Orta, director of football) talked to me I knew I wanted this new challenge with Leeds.

“I will be working with one of the best coaches (Marcelo Bielsa) in football, he has done important things in different clubs and I’m excited to learn.”

Rodrigo spent time at Celta Vigo and Real Madrid as a youngster before moving to Benfica.

He netted 27 times in 67 games and was a losing finalist in the Europa League in 2013 and 2014 before joining Valencia.

In his six seasons with Valencia, Rodrigo scored 59 goals in 220 appearances and won the Copa del Rey in 2019.

He previously spent the 2010-11 season on loan at Bolton, making 21 appearances and scoring once.

Rodrigo was born in Brazil but is a Spain international and has played 22 times, scoring eight goals.

He scored 10 goals for club and country in 38 games last season, including the winner in Valencia’s 1-0 Champions League win at Chelsea in September.