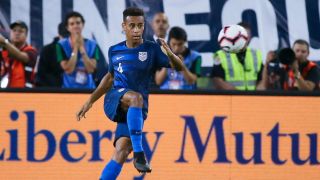 The 19-year-old has long been linked with a move to the Bundesliga club, where former Red Bulls boss Jesse Marsch, who brought Adams through, is serving as assistant coach.

Adams, a highly rated box-to-box midfielder, established himself as a key man for the MLS team, helping them clinch the Supporters' Shield this year as they set a single-season points record.

But following their exit from the play-offs on Thursday with defeat to MLS Cup favourites Atlanta United, Adams has joined Leipzig on a deal that runs until 2023.

"As a young player, it's something quite special to soon be playing in the Bundesliga," Adams said after his move was confirmed on Sunday.

"I think of this league where I think a lot of young talents have made the next step in their development. That's a philosophy Leipzig have, so it's the right move for me to continue my development.

"For me, it's a chance to prove myself at a top level and go toe-to-toe with my friends and compatriots, like Christian Pulisic of [Borussia] Dortmund and Weston McKennie of Schalke."

Adams has nine caps and a single goal for the USA, having made his senior international debut in 2017.