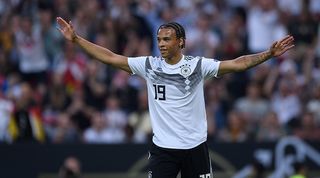 According to Bild, Bayern Munich's sporting director Hasan Salihamidzic has officially begun negotiations with Manchester City over the transfer of Leroy Sané.

Sané has been on Bayern's radar for some time now, but this is the first official move the club have made, raising the possibility that the German will complete the transfer.

Speaking during their pre-season tour of Asia, Pep Guardiola left the ball in Sané's court, saying: "He has to decide. If he wants to go, he can go, but we'll be sad."

In the same article there is a suggestion that Manchester City may be forced to sell Sané in order to comply with Financial Fair Play.

City's transfer outlay over the past three years is approaching €500m, and without offloading players there are fears they will be punished by UEFA.

The transfer window in Germany is open longer than in England, where it closes on August 8, but Guardiola has urged Sané to make a decision over his future quickly.

Can you name the 50 African players with the most Premier League appearances?