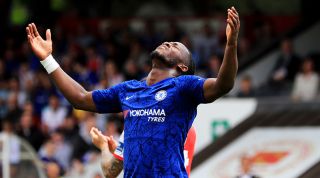 When Roman Abramovich took over as Chelsea owner in 2003, the Blues turned to the transfer market for divine transformation. That pattern has continued despite the club’s 13 managerial switches at Stamford Bridge since.

That’s all changing this summer, though, with the Blues banned from signing new recruits for two windows following improper approaches for under-18 players. Even though the club are appealing the decision, they will be forced to go into the new campaign without any fresh arrivals.

All said, the Blues have offloaded 21 players across first team and academy – but more could be done. These, for starters…

The 29-year-old was signed from Leicester for £35 million in August 2017, but was immediately deemed surplus to requirements under previous manager Maurizio Sarri. Frank Lampard seems to have handed a lifeline to the central midfielder, but it would be wise for Chelsea – already well stocked in that position – to get the Englishman off their books.

Drinkwater earns £100,000 a week and is behind the likes of Jorginho, N’Golo Kanté, Ross Barkley and Ruben Loftus-Cheek in the pecking order. It makes sense for all parties to cut him loose.

Previously signed by Antonio Conte to play in the Italian’s back five, Zappacosta never really got a foothold on the right-back position and quickly fell behind Cesar Azpilicueta in the pecking order. The 27-year-old has struggled for game time since arriving from Torino in 2017, and only started one Premier League match in 2018/19.

Lampard has Reece James – both young and homegrown – back from an incredibly impressive season at Wigan, while centre-back Fikayo Tomori did well under his own watchful eye at Derby.

Zappacosta’s time at Chelsea is surely up, and a return to his homeland looks the most likely outcome here.

The Batman found life difficult at Stamford Bridge across two seasons in the first team, following his £35m move from Marseille in July 2016. He later joined Borussia Dortmund, Valencia and Crystal Palace on loan, and returns to Chelsea hoping to make an impression under Lampard.

Tammy Abraham will be given a chance to shine next season, and the Blues have plenty of forward options to call on with Willian, Pedro, Callum Hudson-Odoi, Olivier Giroud and new signing Christian Pulisic all eager to impress.

Batshuayi is currently on Chelsea’s pre-season tour of Japan, where he will be keen to improve his fitness. Nevertheless, he looks likely to move on before the summer transfer window closes.

Yes, really. The 32-year-old Brazilian’s best days are behind him in a Blues shirt, and Luiz could leave to make way for some younger blood.

Kurt Zouma has been linked with a permanent transfer to Everton following his successful loan spell last season at Goodison Park, but could stay put and play a bigger role at Chelsea. Lampard is keen for the 24-year-old Frenchman to stay, and Zouma could compete with Andreas Christensen, Antonio Rudiger and Tomori for a starting birth.

Luiz recently signed a two-year contract extension with the Blues, which means he's likely to stay for at least another year. If so, the younger players should come first.

Astonishingly, the 25-year-old is still on Chelsea's books. Rahman joined the Blues from Augsburg for £14 million in 2015, but endured a disastrous career at Stamford Bridge thereafter. He played an important role at left-back in his early days at the club, and made his debut in a 4-0 Champions League victory over Maccabi Tel Aviv a month after signing.

After just 23 appearances in Chelsea's miserable 2015/16 season under Jose Mourinho and Guus Hiddink, Rahman was shipped out on loan to Schalke. After two unsuccessful stints in Germany, a January loan at Reims helped him get his career back on track; he made 11 appearances in France and managed a return to Ghana duty for the Africa Cup of Nations this summer.

Marseille are keen on a £5 million deal, and the 25-year-old looks certain to be sold.

Signed from Monaco in 2017 for £40 million, central midfielder Bakayoko struggled from the beginning and spent last season on loan at Milan. He endured a mixed time in Italy, eventually finding his feet after a slow start before falling out with Gennaro Gattuso.

With Loftus-Cheek, Barkley, Jorginho, Mateo Kovacic now signed up permanently and Kanté highly likely to return to his favoured defensive role in midfield, there isn’t much room for Bakayoko in Lampard’s starting XI.

QUIZ Can you name the 26 highest-scoring Premier League players by letter of the alphabet?

Remarkably, Van Ginkel has been a Chelsea player since summer 2013. He endured a tough first season at Stamford Bridge and has since been loaned out to Milan, Stoke and most recently PSV, where he helped the Dutch side clinch the Eredivisie title.

Jose Mourinho previously compared him to Steven Gerrard and Lampard himself when he signed for the club six years ago. “He covers a fantastic area of the field defensively and after that he has this instinct where he wants to go into finishing areas, he wants to score goals,” beamed his former boss. “He’s very good in the air.”

Chelsea fans haven’t got to see much of that, however, and the 26-year-old is surplus to requirements. He could yet return to his homeland and join PSV on a permanent deal.