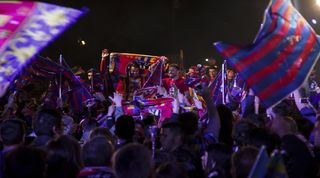 Video: Norwegian player scores bicycle kick Emre Can would be proud of

Video: Vojvodina's Nikola Antic gets sent off for no apparent reason whatsoever

Levante were relegated to the Segunda Division after a disappointing 2015/16 campaign which saw the club finish rock bottom in La Liga.

So, as a goodwill gesture to the fans who stuck with them during their promotion-winning campaign this term, fans have been rewarded with free season tickets – well, the ones who attended at least 85% of league matches this season anyway.

Club president Quico Catalan told Spanish radio station Cadena Cope: "All our members who went to watch our team in 18 games (of 21 home matches) will get a free season ticket for next season.

"That is the pledge we made at the start of the season when we unveiled our aims, and it was on the proviso that the team gained promotion to the top flight.

"The fans had to be, and are, part of this success. It's a beautiful way to reward and generate a sense of fidelity towards this club."

Levante were promoted at the weekend after beating Real Oviedo 1-0 in front of their home supporters at the Estadi Ciutat de València.