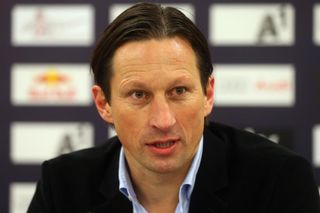 Schmidt joins Leverkusen on a two-year contract after enjoying a magnificent season with Salzburg, who clinched the Austrian Bundesliga title with eight games to play and beat Ajax on their way to the last 16 of the UEFA Europa League.

His Salzburg side have been great entertainers this season, plundering an incredible 105 goals with three league games still to play.

And the 47-year-old will now look to experience further success with a Leverkusen side that parted company with Sami Hyypia earlier this month.

"We sounded out the market and very quickly made up our minds to opt for Roger Schmidt," sporting director Rudi Voller told Leverkusen's official website.

"His approach to playing football fits in perfectly with Bayer 04 Leverkusen."

Hyypia was sacked by Leverkusen following a run of just one win in 12 games since the start of 2014, putting their hopes of securing UEFA Champions League football under threat.

Interim boss Sascha Lewandowski, who served as joint coach with Hyypia in the 2012-13 season, has since engineered victories over Hertha Berlin and Nuremberg, keeping them in fourth, just a point ahead of Wolfsburg.

Lewandowski will return to his role as youth-team coach at the culmination of the campaign, with Schmidt assuming the biggest coaching position of his career to date.

Schmidt said: "I'm really looking forward to the new challenge at a great club and am delighted to be able to work in the Bundesliga."