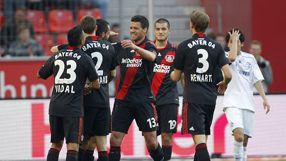 Eren Derdiyok struck on 19 minutes with a stunning shot into the top corner and Schalke defender Christoph Metzelder headed into his own net minutes later to lift Leverkusen to 55 points, with Dortmund on 62 after Saturday's 1-1 draw against Mainz 05.

Schalke, who sacked Felix Magath midweek, had interim coach Seppo Eichkorn on the bench and new coach Ralf Rangnick watching from the stands. The team looked static in a foul-ridden game that left them 10th on 33 points with seven matches left.

Magath had looked like marking his return to VfL Wolfsburg, whom he joined two days after his Schalke exit, with a win over fellow strugglers VfB Stuttgart but the hosts scored deep in stoppage-time to snatch a 1-1 draw.

Striker Grafite, top scorer when Magath led Wolfsburg to the 2009 German title, had promised his boss eight goals in their last eight games and proceeded to deliver five minutes before the break with a fine turn and shot inside the box.

It was not enough to secure all the points, though, as Georg Niedermeier scored in the fourth minute of stoppage-time to rescue a point.

Wolfsburg remain in 17th place on 27 points with Stuttgart two points above in 15th.

Leverkusen looked unfazed by media speculation that Jupp Heynckes would join Bayern Munich from next season with the coach saying a decision would be made on Monday.

With Michael Ballack making a rare league start this season after a string of injuries, Leverkusen had no trouble disposing of their opponents and the midfielder went straight over to fans to celebrate their third win in a row.

"They called for him so he had to take the microphone. That is good for all of us," said team mate Simon Rolfes.

Earlier Ballack had sent Swiss international Derdiyok through with a fine pass and the striker surprised Schalke keeper Manuel Neuer with a powerful shot for the lead.

With Schalke seeming to lack a game plan, Leverkusen kept coming and Metzelder did his team no favours when he headed a Renato Augusto cross into his own net from 10 metres in the 27th minute.

Leverkusen deserved another goal but Augusto's corner kick hit the woodwork and Sidney Sam failed to beat Neuer in a one-on-one situation late in the second half.

Hanover 96 hung on to third spot with a 2-0 win over Hoffenheim on Saturday to stay two points ahead of champions Bayern Munich, who grabbed a 2-1 win at Freiburg thanks to an 88th-minute Franck Ribery goal to remain fourth on 48.