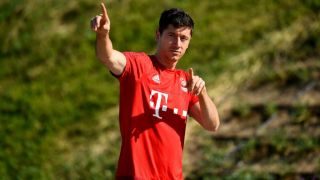 The agent of Robert Lewandowski has refused to rule out a transfer from Bayern Munich as speculation grows that Paris Saint-Germain have entered the race for his signature.

The Poland striker has been linked with a move away from the Allianz Arena at the end of the season, and Bayern chairman Karl-Heinz Rummenigge's admission that the club are monitoring Gonzalo Higuain has cast further doubt on Lewandowski's future.

Lewandowski has stated that the arrival of another forward would not force him into a move elsewhere, yet talk of interest from Real Madrid and French champions PSG refuses to subside.

And the former Borussia Dortmund man's agent, Cezary Kucharski, says he cannot give any guarantees on where his client will play next season despite insisting he remains happy at Bayern.

"We're very happy at Bayern Munich. We'll see what happens in the future, but I cannot tell you any more," Kucharski told L'Equipe.

"For me, he's the best number nine in the world. Everyone knows the price of the best players in their position, but I can't give you a figure.

"I don't think Bayern want to sell him and I don't want to talk about his price, especially since the championship starts again in Germany on Friday.

"In football, you can never know what will happen. The most important thing is that he fights for the Champions League."

When pressed about whether PSG had expressed an interest, Kucharski added: "No comment! It's better not to say anything about it."

Kucharski also explained why Rummenigge's remarks on Higuain have not caused him any real disquiet over Lewandowski's position with the Bundesliga champions.

"The best clubs need the best attackers and Higuain is an excellent forward," he said. "It doesn't surprise me that Rummenigge has talked about him. Just as all the big European clubs talk about Lewandowski."