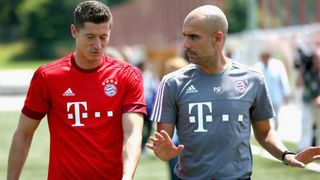 Guardiola's contract with Bayern expires at the end of this season and the former Barcelona boss has stated England's top flight is to be the next destination in his glittering coaching career.

Manchester City, Manchester United and Chelsea have all been linked with the 45-year-old and Lewandowski, who has cemented his reputation as one of the most lethal strikers in European football under Guardiola's tutelage, feels his tactical flair and ingenuity would flourish in England's top flight.

"I know Pep can improve a team in England," the Poland international told the Mail on Sunday.

"He will focus on technique and perhaps more possession than is the norm in England. But Pep knows the Premier League is different from the Spanish league or the Bundesliga.

"I'm sure he can do something new in terms of tactics and technique."

A forward in the mould of a traditional number nine, Lewandowski feels his game has developed considerably under Guardiola, who built his reputation by crafting fluid attacking line-ups around the mercurial talents of Lionel Messi at Barcelona.

"Of course, I had to learn a few things in the first couple of months but Pep was able to see he could get the best out of me to help the team," Lewandowski said.

"I can say I'm a better player [since working with him] and you can learn something new in every training session and that's what I imagined when I moved from Borussia Dortmund. I knew I could become a better player here at Bayern.

"Pep thinks about football 24 hours a day. He covers every angle to the smallest detail and he always demands 100 per cent in training and in games.

"I'm in my second year with him, I've learned a lot and working with him has been just what I needed. Pep looks at everything we need to do. I watched what I ate and I trained at home. I know the little things are important too."