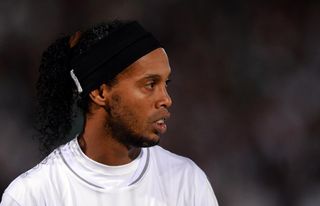 Ronaldinho surprisingly signed a two-year deal with Queretaro as a free agent last week and he was tipped to make his league bow at home to Puebla on Friday.

However, with the former Brazil international only set to touch down in Mexico on Thursday after his official presentation on Wednesday was rescheduled, it is unlikely the 34-year-old will feature.

While Queretaro are excited by the arrival of the World Cup and Ballon d'Or winner, Brazilian attacking midfielder William Fernando da Silva insisted the team were solely focused on ending their two-game losing streak.

"I like all our players are excited by the arrival of Ronaldinho, and now it is up to us in a very tough game and we have to play well so we can stay in zone play-offs," said William.

Meanwhile, slumping league leaders America hope the international break will result in a change of fortune.

America opened the season with five consecutive wins to sit clear at the summit, but a draw and a loss has opened the door for the chasing pack, with rivals Monterrey now level on 16 points.

Antonio Mohamed's men were stunned 1-0 by Pumas UNAM before the break but midfielder Jesus Molina said he believes the week off has proved beneficial ahead of Saturday's trip to second-bottom Universidad Guadalajara.

"This week helped us to recover injured players and worked hard to improve certain details that failed us in the game against Pumas," he said.

Monterrey - on a three-game winning streak - are also in action on Saturday, playing host to Guadalajara and defender Stefan Medina is determined to maintain that run as the club attempt to keep pace with America.

"It will be a nice opportunity to continue competing for three points that will keep us at the top of the table," said Medina.

"We have to leave the field to give our maximum potential and know that it is a team with great players."

In other fixtures, third-placed Atlas can end their two-game winless run with victory at lowly Veracruz on Friday.

In-form Santos Laguna, who occupy fourth spot, are at home to defending champions Leon on the same day.

Santos Laguna have won two and drawn one of their past three games, while Leon have lost two on the bounce.

The round concludes with Pumas UNAM welcoming Tigres UANL to the Estadio Olimpico Universitario de Colima on Sunday.