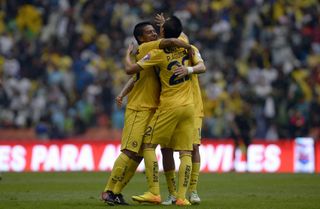 Rubens Sambueza opened the scoring after 19 minutes for the hosts, before Miguel Layun doubled the advantage six minutes into the second half.

Raul Jimenez bagged a third after 69 minutes, meaning that Carlos Ochoa's reply four minutes later was nothing more than a consolation.

The result saw America climb above Morelia, who fell to a 3-1 home defeat at the hands of Monterrey.

Guillermo Madrigal scored twice for the visitors on 50 and 56 minutes, before Aldo Ramirez pulled one back for Morelia midway through the second half.

But any thoughts of a comeback were short-lived, as Alejandro Garcia found the net in the 77th minute to seal the points for Monterrey.

Leon climbed above Morelia into second thanks a 2-1 home success over Guadalajara.

Hernano Burbano gave the hosts the lead in the 10th minute and Luis Montes scored a second eight minutes before half-time.

Miguel Ponce pulled one back seven minutes after the break but Guadalajara could not find an equaliser.

Leon are now level on points with leaders America, but they have played two games more than their rivals.

At the other end, Atlante climbed off the bottom above their opponents Pumas UNAM as Hector Morales' goal in stoppage time handed them a 1-0 victory.

Meanwhile, Santos Laguna climbed to sixth with a 1-1 draw away to Pachuca.

Fernando Cavenaghi gave the hosts the lead in the 24th minute but the visitors snatched a point with a goal from Eduardo Herrera in the third minute of stoppage time.

Fourth-placed Queretaro suffered a setback as they were thumped 4-0 away at Toluca, while 10-man Atlas secured a late 3-3 draw at home to Veracruz.

Angel Reyna's penalty put the visitors in front in the 29th minute, before Omar Bravo replied with a penalty of his own eight minutes later to level the scores.

Two goals shortly after the break from Cristian Martinez Borja and Jesus Sanchez gave Veracruz a two-goal advantage, but Vicente Vuoso pulled one back with 15 minutes to go before Lucas Ayala was sent off.

But they made light of their numerical disadvantage as Edson Rivera snatched a point in the fifth-minute of stoppage time.

Elsewhere in the division, there were goalless draws in the matches between Tijuana and Cruz Azul, and Tigres UANL and Puebla.