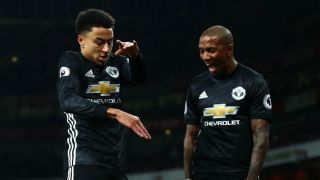 Jesse Lingard has welcomed Alexis Sanchez to Manchester United, joking that he knew the Chile international "wanted to come Milly Rock with the mandem".

The 'Milly Rock' is a dance performed in celebration by a number of sports stars, including Lingard, and is thought to have originated at a similar time to 'dabbing' - popularised in the Premier League by United team-mate Paul Pogba.

Lingard's Twitter post features an image of himself, supposedly on the phone to Sanchez, and has been met by a mixed response from his followers, with some branding the tweet an "embarrassment".

Given Sanchez's limited English, it seems unlikely he will appreciate Lingard's invitation to "come Milly Rock with the mandem".

But the offer's there, Alexis.

Hello, Is That ? Welcome To I Knew You Wanted To Come Milly Rock With The Mandem January 22, 2018