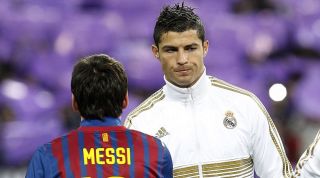 Barcelona captain Lionel Messi says his side's clashes with Real Madrid were better when Cristiano Ronaldo was still at the Santiago Bernabeu.

Ronaldo ended his stay in the Spanish capital when he joined Juventus in 2018.

The Portugal international enjoyed some titanic tussles with Messi during his nine-year association with Madrid.

And the Argentinian forward says El Clasico was more "special" when Ronaldo was a part of it.

"It was a special duel and it will remain [in people's minds] forever, because it lasted for many years and it is not easy to maintain such levels for a long time," Messi told DAZN.

"Plus, the teams we played in were also very demanding, both Real Madrid and Barca, the two best teams in the world.

"Competing on an equal footing for so many years, I think it will remain [in people's minds] forever.

"The sporting duel between us was very nice on a personal level and I think people had fun too, whether they were fans of Madrid or Barca, or even only football fans in general.

"Obviously, when Cristiano was at Real Madrid, the matches were always special.

"The matches against Real always mean a lot, but when Cristiano was there they became much more special.

"But it's a time that has passed now, that we have experienced. Now, we have to look ahead to the future."

Messi also admitted that he is no longer so preoccupied with finding the back of the net.

The Argentinian is still a prolific scorer but has become more involved in the build-up play during the last couple of years.

“I think less and less about scoring goals. I'm starting to step back more and more to be the creator rather than the one who finishes.

“Obviously I like scoring and If have a chance I'll take it, but every time I go on to the pitch I'm less focused on scoring goals and more focused on the game. I've never been obsessed with goals.

“I understand that people will talk about it when I stop scoring so many, but that's part of the game, part of growing as a player and adapting to the times, to be the best player both for yourself and for the team.

“There was a time I didn't score many goals. I always scored goals both for Argentina and for Barcelona's youth team, but I had a hard time scoring during the first few years I played in the first team. I would either make mistakes or I was unlucky.

“I had so many chances but I couldn't score, until one day everything clicked and the ball started going in. It took me a few years before that happened.

“I remember [Samuel] Eto'o told me: 'the day you start scoring, you won't stop'.”