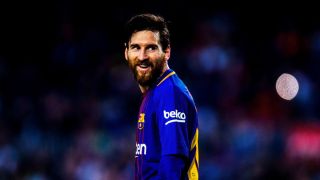 The mercurial number 10 has been given extra time to recover from football's global showpiece, even though Argentina were knocked out on June 30.

Barca travel to the US on Tuesday for the International Champions Cup, the Spanish champions facing Tottenham, Roma and AC Milan over the next 10 days.

Ernesto Valverde will be without Messi, though, while Spain's Gerard Pique, Jordi Alba and Sergio Busquets also sit out.

World Cup winner Samuel Umtiti, Luis Suarez and Ousmane Dembele are all still on holiday, as is Ivan Rakitic, a losing finalist in Russia with Croatia.

That means Barca will have an inexperienced team for the three matches in the States, with the likes of Sergi Samper, Munir and Marlon joining new boys Clement Lenglet and Arthur.