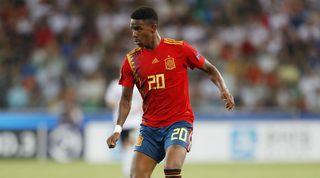 The Real Betis left-back was part of Spain's victorious under-21 side at the European Championship this summer.

Firpo has attracted interest from both Liverpool and Barcelona after an impressive season at Betis.

He is believed to have a €50 million release clause in his contract, but both interested parties are reluctant to meet it outright.

According to Muchodeportivo, Liverpool are considering including Belgian striker Divock Origi as part of the deal.

Liverpool are keen to sign a young left-back to compete with Andrew Robertson, who has been a revelation for the Champions League winners.

The report claims that the Reds will have to table an offer of at least €30 million to tempt Betis into selling - but by adding Origi to the deal, their chances could improve dramatically.

Barcelona could still swoop, however, as they hunt for the next Jordi Alba.

New Premier League kits 2019/20: EVERY released home and away shirt