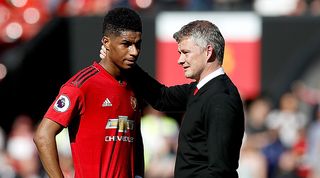 With pre-season plans taking shape and the transfer window open for business, Manchester United fans are gearing up for their first full campaign under Ole Gunnar Solskjaer.

Most are convinced that 2019/20 will be added to the ‘intermittent years’ – but that isn’t to say the Norwegian is free of expectations at Old Trafford this term.

Here are five things United have to achieve...

Even though Solskjaer arrived at Old Trafford to replace the floundering Jose Mourinho last December, there are still rumblings of discontent in the dressing room.

The first thing he has to remove is the individual egotists who put themselves before the team. For too many years in the era since Sir Alex Ferguson retired, the Red Devils have been dictated by personalities in the dressing room.

Solskjaer has to destroy this mentality and create a new atmosphere where everyone is not only pulling their weight, but pulling in the same direction too. Easier said than done, but the former Molde manager has to hit the ground running from pre-season and set the right tone.

2. Stick with a philosophy

From David Moyes to Ryan Giggs, Louis van Gaal to Mourinho, Manchester United have chopped and changed far too frequently and not properly backed their managers.

Whether not believing in their ideas on the pitch (in Van Gaal’s case) or ignoring demands for players they wanted to sign (Mourinho), the club cannot carry on this way with Solskjaer in charge.

The step up for him is as big as it gets, and he needs the full support of his club behind him. The board have shown some of their faith by snapping up young and British talent, signing Aaron Wan-Bissaka and Daniel James to kick off a new era at Old Trafford. But when the going gets tough, will they continue to back Solskjaer all the way?

While few Reds are expecting “glory, glory Man United” in Solskjaer’s first season, the fans do want to see progress being made on the pitch – which is why a deep run in the FA Cup would alleviate their concerns.

A top-four finish is going to be harder than ever given the competition, but with Arsenal’s limited budget and Frank Lampard taking over a transfer-embargoed Chelsea, there could be a golden opportunity for United to sneak in.

Either way, Solskjaer cannot – and will not – get away with underperforming in his first year. Ed Woodward & Co. may allow for some leniency, but Red Devils supporters still expect to see significant improvement.

Manchester United have rewarded mediocrity for far too long, and Solskjaer being in charge makes for an opportunity to move away from this. He got tough towards the end of last season when his side was suffering, declaring his intention to be “ruthless”. “It’s going to be survival or the fittest of survival of the best,” he concluded.

By next summer, the Red Devils must be in a position where they can rid themselves of underperforming players whose performances don’t warrant their bloated contracts. Ashley Young, Phil Jones and Marcos Rojo have all signed new deals within the last 12 months, but these three players – along with Matteo Darmian – should be shown the door.

If Manchester United are to regain their status as one of the world’s biggest clubs, they need to start acting like one once more.

Solskjaer has made it very clear that he will favour academy players on the verge of breaking through, a philosophy he backed up in his first six months.

The English trio of Garner, Gomes and Greenwood will be expecting more minutes next season – particularly Gomes, who has asked to play more or seek pastures new.

Solskjaer will be bringing in more players this summer, but it’s important for him to reference the academy and make sure players are still making their way into the first team. That still means something at Manchester United.

QUIZ! Can you name the 50 youngest ever Premier League managers?

FEATURE Out with the old guard: the death of the ageing British manager