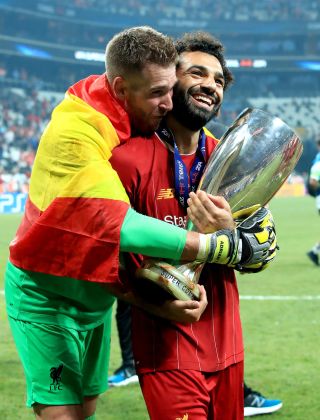 Liverpool goalkeeper Adrian admitted his first week at Liverpool had been a crazy one after he helped his new club win the Super Cup with a save in the penalty shoot-out victory over Chelsea.

The former West Ham keeper had found himself without a club after leaving the London Stadium but Liverpool manager Jurgen Klopp brought him to Anfield as back up to Alison Becker.

But when the Brazilian was injured during the 4-1 win over Norwich, Adrian came in and then started the Super Cup match against Chelsea in Istanbul, picking up a winner’s medal after saving Tammy Abraham’s spot-kick as the Reds won the shoot-out 5-4 after the game ended 2-2 following extra time.

Adrian told BT Sport: “Welcome to Liverpool. It was a crazy week.”

Adrian praised his team-mates, adding: “With them, it’s so easy to play at the back.

Adrian revealed he had tried to pull out of the challenge on Abraham which led to the penalty for Chelsea’s second equaliser during extra time.

He said: “I tried to stop when I saw him. I touched him but he was looking for that.”

The game had gone to extra time after a Sadio Mane double had cancelled out Olivier Giroud’s opener for Chelsea before Jorginho’s penalty took it to a shoot-out.

Klopp and captain Jordan Henderson both praised the part played by Adrian.

The Liverpool manager paused his TV interview to call out the keeper’s name and referenced a scene from the hit film Rocky.

Henderson added: “I’m delighted for Adrian who’s just come into the club and he’s the hero.”