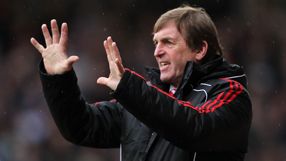 Liverpool desperately want to avoid United moving ahead of them in the record books by lifting the championship a record 19th time.

When Sir Alex Ferguson took over as United manager in 1986 he proclaimed his target was to "knock Liverpool off their perch" but by the time he finally managed to win the league in 1993, United's eighth title, Liverpool had extended their tally to 18.

United's remarkable dominance since then, married to Liverpool's 21-season barren spell, has brought the north-west rivals level on 18 titles, with United homing in on the 19th.

Tuesday's 2-1 setback at Chelsea put the brakes on that charge to a fourth title in five years and though United still lead the way on 60 points, Arsenal, who host Sunderland on Saturday, are four points behind with a game in hand.

Third-placed Manchester City, on 50 points, are at home to Wigan Athletic on Saturday with Chelsea, away to Blackpool on Monday night, are up to fourth on 48. Fifth-placed Tottenham Hotspur (47 points) visit Wolverhampton Wanderers on Sunday.

United have beaten Liverpool in the League and FA Cup at Old Trafford this season but will travel west with some trepidation having lost on their last two visits to Anfield.

They will be without centre back Nemanja Vidic following his sending off at Chelsea but since he was red-carded late in both those Anfield defeats, it might be a blessing in disguise.

Rio Ferdinand is also out injured so Chris Smalling, who has been impressive in recent weeks, is set to partner Wes Brown in central defence.

Midfielder Michael Carrick said the team had a proven record at doing just that.

"At the moment we feel pretty down, but we can move on quickly. We have to," he said. "We're used to doing that and we're normally good at it so hopefully we can bounce back again.

"We have to get rid of this game, forget about it and move on. It's obviously a huge game on Sunday and we'll be ready."

Liverpool's charge up the table has slowed as, after four successive wins, they were held 1-1 at home by Wigan then lost 3-1 at West Ham United last Sunday.

They remain sixth on 39 points, eight adrift of Spurs from a game more, and likely to be in the mix for another season in the Europa League.

Striker Andy Carroll has returned to training after recovering from a thigh injury and could feature on the Liverpool bench for the first time since his deadline day arrival from Newcastle United.

Arsenal will need all their famed "mental strength" to concentrate on a Sunderland game sandwiched by cup action.

The disappointment of last weekend's upset 2-1 League Cup Final defeat by Birmingham City was tempered by Wednesday's 5-0 victory over Leyton Orient that sent them into the FA quarter-finals.