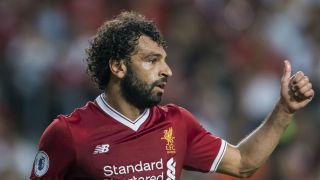 Sadio Mane believes he is second best in the speed stakes at Liverpool since Mohamed Salah's arrival at Anfield.

The 25-year-old Senegal star had his campaign ended prematurely by a knee injury sustained during April's Merseyside derby win over Everton.

He returned to action in the 3-0 weekend friendly victory over Hertha Berlin and was impressed by the contribution of record signing Salah, who notched a third goal of pre-season.

"Everybody has seen how he's quicker than everyone on the pitch," Mane told Liverpool's official website of the former Roma man.

"He's a nice lad and a great player."

And Mane is sure he can combine effectively with the Egypt winger in Liverpool's forward line.

"I am able to play every forward position," he added. "I don't have a problem with that.

"I have played left wing, right wing and striker – it’s no problem for me."