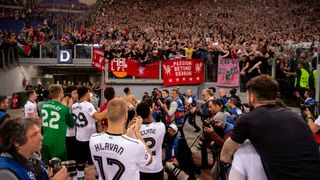 Liverpool and Merseyside Police have praised the behaviour of the club's fans after the Champions League semi-final second leg against Roma passed without incident.

A Liverpool supporter was left in a critical condition after trouble erupted outside Anfield in the minutes leading up to kick-off in last week's opening leg.

But after Liverpool issued strict advice to supporters planning to attend the return match in Rome, the police highlighted the good behaviour of the fans who headed to Italy.

Away supporters were held back at the Stadio Olimpico for an extended period after the match, which saw the Reds progress to the Champions League final against Real Madrid in Kiev despite a 4-2 loss.

"Liverpool would like to thank all supporters who travelled to Rome for Wednesday evening's Champions League meeting with Roma at Stadio Olimpico for their exemplary conduct," a club statement released on Thursday said.

"Over 5,000 fans made the journey to the Italian capital for yesterday's semi-final second leg, behaving impeccably throughout, with no major incidents reported.

Merseyside Police also highlighted that Liverpool supporters emerged with credit from the trip to the Italian capital.

Chief superintendent Dave Charnock said: "I would like to commend the Liverpool fans for their exceptional behaviour during last night's match in Rome.

"It was all very good natured and there were no major issues reported. I would also like to thank the stewards and staff from Liverpool for their support and assistance."