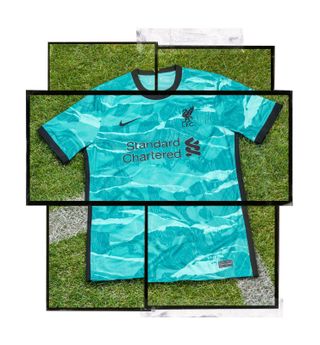 Liverpool have released their new Nike away kit for the 2020/21 season and it's safe to say they've gone bold this year.

The new teal kit (that's right, teal!) is apparently heavily influenced by the Liver Bird, the official symbol of the city of Liverpool. The kit also pays homage to the Shankly gates, which are brought to life through the swirling pattern covering the shirt.

Liverpool's away kits under old sponsor New Balance tended to be more simple, plain affairs, so fans of jazzier away designs will be thrilled with Nike's debut offering. In FFT's book, the whole point of an away kit is to do something a little more daring and fun and so we fully salute this kind of behaviour. As, it appears, does Jordan Henderson.

“I’m a massive fan of the new away kit,” says the Liverpool captain. “I really love the design and how it has been influenced by the city and specific aspects of the club. I can’t wait to get back out there and play in it next season.”

The new away kit isn't all bold colours and lairy statements, however, as a more thoughtful, sombre touch sees a memoriam of the 96 men, women and children who lost their lives at Hillsborough included on the nape of the neck.

The shirt will be complemented by teal shorts and socks. The 2020/21 Liverpool FC away kit is available now for Early Access at nike.com and at all retailers August 17. It is also available for pre-order in LFC retail stores and online at store.liverpoolfc.com.