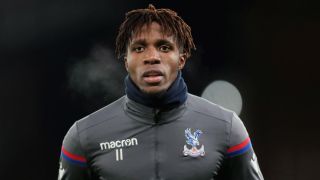 Frank de Boer feels Liverpool would be a great option for Wilfried Zaha, who could "play for a much bigger club than Crystal Palace", according to the Dutchman.

Zaha suffered a knee injury in De Boer's first match in charge of Palace in August.

A nightmare start to the campaign in the forward's absence then prompted the swift dismissal of the former Ajax and Inter boss.

The return to fitness of the Ivory Coast international has coincided with a major upturn in the Eagles' form under De Boer's successor Roy Hodgson.

Zaha failed to make an impact after moving to Manchester United in 2013, returning to Selhurst Park on loan before re-joining Palace two years later.

De Boer, though, feels the 25-year-old is equipped to perform at the highest level.

"I was really a little bit unfortunate that he was injured in the first game," De Boer told Omnisport.

"I missed him in the coming six games. He has a major impact for Crystal Palace because he can make something out of nothing.

"He can play for a much bigger club than Crystal Palace, that's for sure, I'm 100 per cent convinced."

Asked if a January move could benefit Zaha, De Boer said: "Not really right now, because he has to play every game, every week, I think that's important for him right now.

"Liverpool would be a great club for him but I'm going to see what he does in the future, I'm very interested in him because I think he has a great potential."