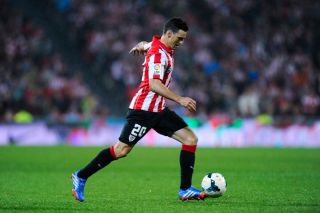 Bilbao travel to the Stadio San Paolo on Tuesday for the first leg of the Champions League play-off tie as they bid to reach the group stages of Europe's premier club competition.

Ernesto Valverde's men, who finished fourth in La Liga last term, perhaps head into the clash as underdogs against a Napoli team that is making their third appearance in four seasons in the Champions League.

Aduriz told how former Bilbao striker Llorente, who left the Basque club in July last year to join Napoli's Serie A rivals Juventus, has spoken to a few of his former team-mates about the threat posed by Rafael Benitez's side.

And forward Aduriz insists that Bilbao will travel to Italy with plenty of confidence.

"I haven't [spoken to Llorente] but a few of the lads have," Aduriz said. "He told them about how difficult it is for visiting teams over there and a bit about what kind of team they are. He said Juve had a tough time there last season.

"We've been studying them and we have a few more days to get a clearer idea of what kind of team we will be up against.

"We've been looking at them ever since the draw was made. We know that they are a compact side who have pace up front, quality and a coach who will know all about us. They are an experienced side and that will make this tie especially difficult.

"We know it's going to be a tough tie but we're confident in our own abilities.

"We have shown that we can compete with any team; we won't be going over there with any hang-ups, we'll be going for the tie right from kick-off. I'm sure they will be just as worried about us."