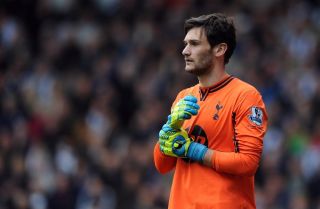 Tim Sherwood's men lie sixth in the Premier League table, and are set to miss out on a spot in next season's UEFA Champions League.

Too often this season their defensive frailties have been ruthlessly exposed, with 27 goals conceded in eight matches against teams currently in the top four.

Lloris has frequently made stunning stops to save the blushes of his colleagues, and the France international was scathing in his analysis of the team's performances.

"It will be difficult to do worse (next season)," he told the British media. "Especially against the top four or five teams.

"We have had a lot of bad defeats. This season there has sometimes been the feeling that we have given up. We can't allow this kind of behaviour.

"We have to show more character. We did it in other games. But we have to keep our mentality in every game at the best level because in this league you have to be 100 per cent every time you play."

Lloris was named man of the match in last weekend's 3-1 win over Fulham, after saving Steve Sidwell's penalty and producing a flying stop to deny Hugo Rodallega's header, among others.

"It is always a pleasure to receive that kind of thing but if the goalkeeper is man of the match then it means the team didn't do the job properly," he said.

"I'm a competitor and I try always to do my best for the team. I want to see my team-mates do the same.

"It's strange because we have a feeling that we can play at a very high level.

"But we can also play at a very bad level during the same game. It has put us in trouble a lot of times this season."