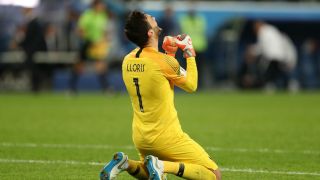 The experience of Euro 2016 heartache has hardened Hugo Lloris' resolve to lift the World Cup as France captain on Sunday.

Portugal stunned Les Bleus on home soil two years ago, recording a 1-0 extra-time win at the Stade de France through unlikely hero Eder after Cristiano Ronaldo hobbled out of the final injured.

Head coach Didier Deschamps made it two major finals out of two on Tuesday when Samuel Umtiti headed in the only goal to down Belgium in St Petersburg.

Although boss and skipper remain, this is a much-changed France squad – a hearty injection of exceptional young talent meaning only nine members remain from the 23-man squad that contested the European Championship.

"It's an amazing feeling but we already lost the final two years ago and that's why we feel [the need] to keep our feet on the floor," Lloris said.

"It's important to keep the belief because the belief is strong in our team. There is still one game to play and the most important of our careers.

"Most of our players were not at the Euros. There was a lot of change between the competitions.

"For the players who were involved, yes, we can use our own experience to show the right way to the young lads."

Deschamps, who also led France to the quarter-finals of the 2014 World Cup, has not always enjoyed universal praise for his work with France but Lloris believes the man who wore the armband he now calls his own with distinction has found the ideal tactics for the knockout rounds of this competition.

"The manager deserves a lot of credit," he said. "Against Argentina, Uruguay and then again against Belgium, his plan was perfect.

"We adapt a bit the way we play against our opponents and this is to his credit. The players do our best on the field and try to respect what the manager says.

"Then we have the talent, the belief, the spirit to turn the game in the way we want."

Returning to an earlier theme, Lloris added: "The most important game in our career is ahead of us. We will try to make sure that we put everything on our side."