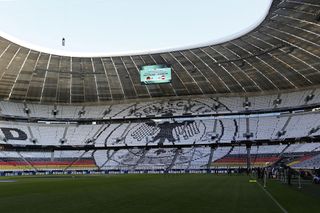 Nineteen member associations have submitted bids to host matches at the competition, which will be held in 13 different cities across the continent in six years' time.

However, the only bids for the semi-finals and final package came from England and Germany, with Wembley and the Allianz Arena also in the running to stage matches earlier in the competition.

Thirty-two associations had initially expressed an interest in hosting matches and those who have submitted dossiers will learn their fate on September 19, when the UEFA Executive Commitee announce their final decision.

"We are extremely happy to have received so many bids to host UEFA EURO 2020," said UEFA president Michel Platini in a statement.

"The 60th year anniversary edition of the tournament will be an historic one, with matches played in many European countries.

"By spreading the EURO across our continent, we will allow more fans from more nations to share in the excitement of hosting such a magical event.

"Member associations will also benefit greatly from this format, since more of them will be exposed to an elite tournament and have the opportunity to increase the development of football in their respective countries.

"I wish all the candidates the best of luck in this bidding process."